When I first started growing orchids, some 45+ years ago, I made do with cold white fluorescent shop lights and ordinary incandescent light bulbs, set up 50/50 wattage-wise. Then we started seeing actual “plant light” bulbs and later T5HO fluorescents that really improved the environment for indoor growers. Now we have LEDs, which can save a bundle in energy costs, but choosing a light fixture can still be a problem. 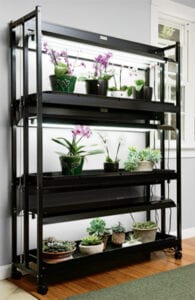 Let’s start by looking at the lighting units of measure that are commonly used in horticulture, as that will start us down our path to choosing the light fixture we really need.

If you look at published culture sheets for orchids, you will see light recommendations along the lines of “3000–3500 foot-candles”.  So what is a foot-candle?  Quite literally, a foot-candle is the amount of illumination a single burning candle projects (also known as a candela) onto one square foot of surface area from a distance of one foot. 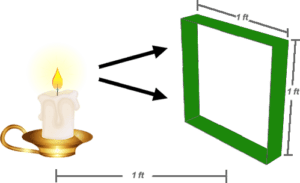 Alternately, a foot-candle is a lumen (lm) per square foot, although that is technically defined at a wavelength of 555 nanometers (nm), where the human eye is most sensitive.

When you look at the specifications for T5HO florescent fixtures, you’ll often see the term “initial lumens”. That value is nothing more than the sum of the maximum output calculated for each bulb. For example, a T5HO bulb typically produces 90 lm per watt of input power. A 4 foot, 40-watt bulb therefore, has an “initial output” of 40×90 = 3600 lm. A four bulb fixture therefore, would have a specification of 4×3600 = 14,400 lumens.

Remembering that a lumen is characterized by how it looks to the human eye, you can understand why one cannot easily apply these units to a basic LED fixture containing red and blue chips, as while the light intensity reaching your plants might be the same, it certainly doesn’t look the same to us.  To make that easier to understand and manage, let’s go back to physics class for just a moment and recall that light can be thought of as consisting of particles called “photons”.  If we turn our attention away from the “brightness” of our light source, and focus instead on the number of photons the plant receives, it gets a lot easier.

Going back to our “3000–3500 foot-candles” recommendation for a particular plant, the first thing we need to understand is that it is a recommendation for the maximum amount of sunlight to which the plant should be exposed, starting at zero at dawn, reaching that peak at noon and returning to zero at dusk. It is the area under that curve that defines the total quantity of light the plant receives. 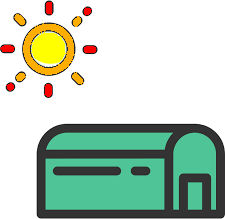 Among horticultural professionals, that total quantity is known as the DLI, or “daily light integral”. It is the sum of the photons hitting the plant over a complete day, and is expressed as the quantity of photons (moles) per area (square meters) per time unit (day). The rate at which light hits the plants is known as the PPFD, or photosynthetic photon flux density, and that is expressed as micromoles per square meter per second (µmol/m2/sec).

Keep in mind that the shape of this dawn-to-dusk curve, being roughly triangular, means that the area inside the triangle – the total quantity of light – is approximately one half of the maximum received at noon multiplied by the number of hours of total daylight.  That means that if you are growing entirely under artificial light, the continuous light intensity should be approximately 50% of the recommended maximum light level for the plant.

In other words, if translating from a “maximum sunlight” recommendation in foot-candles to PPFD of artificial lighting, just divide by 10!

As there are so many different LED configurations available, ranging from all red and blue LEDs to various shades of white and some that claim to be “full-spectrum”, it can be confusing.  However, the PPFD value is often given for such lamps, allowing you to better estimate the needs of your plants, no matter what spectral configuration you choose.

All lamps put out a certain rate of photons – micromoles per second – so the key to estimating how well a specific lamp will work for you is controlled primarily by the surface area to be lighted, and you can estimate that by your bench size. Keep in mind that there are losses as the light “spills” out into the room, but LEDs are quite a bit more directional than other light sources, and by the use of bright white walls for your plant enclosures, most of the spilled light can be redirected to the plants.

So basically, if you have a recommendation for the maximum light your plants need, and you know the area they will occupy under your lights, you have the tools you need to choose the proper light fixture, knowing that you can raise or lower it over the plants to make final adjustments.