During the development of my Semi-Hydroponic orchid culture technique, it became apparent that the successful use of inert media was directly connected to three factors: 1) free air flow to the root zone, 2) maintenance of a constant supply of moisture and nutrients, and 3) stability of the medium in the pot. Free air flow to the roots is, of course, and important consideration in all orchid culture, but the other two criteria require additional thought as these media do not absorb as much moisture as organic media, on a weight-for-weight basis, and cannot be compressed in the pot to anchor the plant.

My original experiments utilized #1 “horticultural grade” perlite that had been rinsed and then screened to provide essentially 100% of the particles around 1/4″ in diameter. That medium proved to be acceptable only with pleurothallids and other fine-rooted plants, as well as cymbidiums that are known for their tolerance of more “terrestrial” type media. Later, a combination of #4 sponge rock (perlite) and medium grade charcoal in a 50/50 mixture by volume proved better. With particle sizes for both materials in the 1/2″ to 3/4″ range coupled with their irregular shapes, my success criteria appeared to be well met, and indeed, many more types of plants thrived.

Unfortunately, the sponge rock was light and quite buoyant, resulting in the medium floating whenever it was watered, and plants tended to get “unseated” unless they were well established in the pot. The addition of a gravel top layer reduced the tendency, but the gravel tended to mix into the medium, defeating its purpose. Over time, I also noticed two negatives with that medium: the growth of roots and handling of the potted plants led to disintegration of the sponge rock, which restricted air flow to the root zone, and the medium tended to accumulate salts.

Then I discovered Lightweight Expanded Clay Aggregate (LECA) ceramic media, and my overall success rate began to be acceptable.

My initial trials – with Aliflor brand medium having individual particles in the 8 mm-to-14 mm size – were met with mixed results. Of particular concern was the rapid drying of the medium in the upper part of the pot after watering, and the relatively fast development of a “bloom” on the surface, indicating a salt buildup from the fertilizer solution. That was a bit discouraging, but I was determined to find a “carefree” culture technique, so I kept on digging.

After a little searching, I acquired samples of two additional LECA media: one unbranded variety provided by the Taiwan Fu Kung Industrial Company, Ltd., and the other the PrimeAgra brand, imported from Europe (please note that PrimeAgra is no longer manufactured). At that point I was prepared to run a “bench top” inert media comparison of the three brands to assess their relative applicability to my culture technique.

Physically, the media are similar only in the fact that they appear to be made of terra cotta clays similar to that used for the production of flower pots. As can be seen from the photograph below, the Taiwanese material (TWFKI) is extremely spherical and uniform in size. The Aliflor is smaller, less uniform in shape, and has a very rough surface bearing lots of tiny protrusions. The PrimaAgraTM material is also less uniform in size as well as shape, but has a smooth, almost shiny surface.

Later, I received a sample of the gray expanded shale material sold as Stalite, and subjected it to some of the same testing. 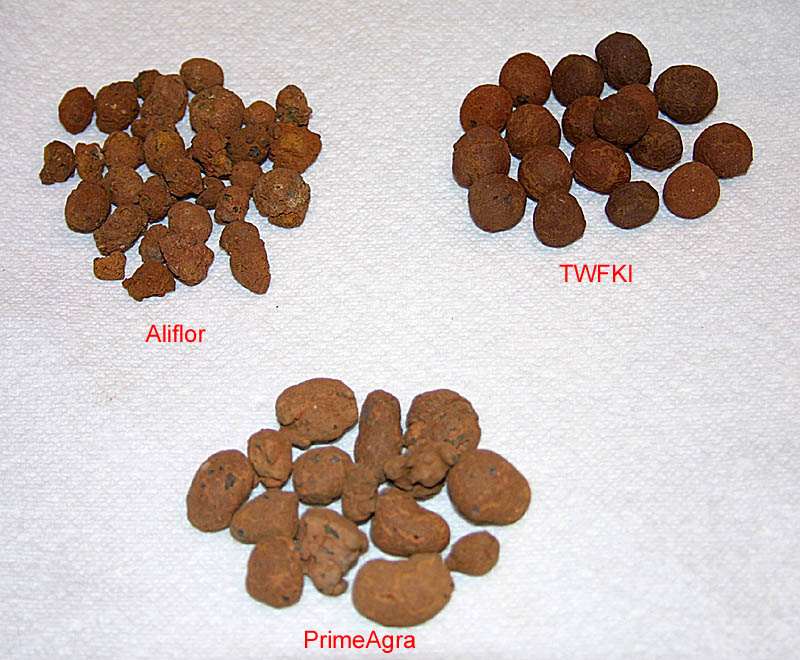 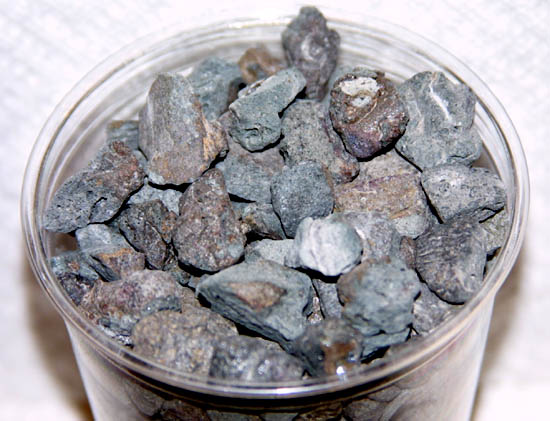 One of the initial issues related to media is the stability in the pot. If the medium is too buoyant, it may have a tendency to float when the plant is watered. Additionally, if the particles are too uniform in shape, they do not “lock” themselves into place, and are too easily moved during handling of the potted plant. With either one of those cases, the plant will find it difficult to gain a foothold, and may not flourish.

Evaluation of the buoyancy was done by filling 300ml clear plastic containers with media, and then adding sufficient water to fill the container to its rim. 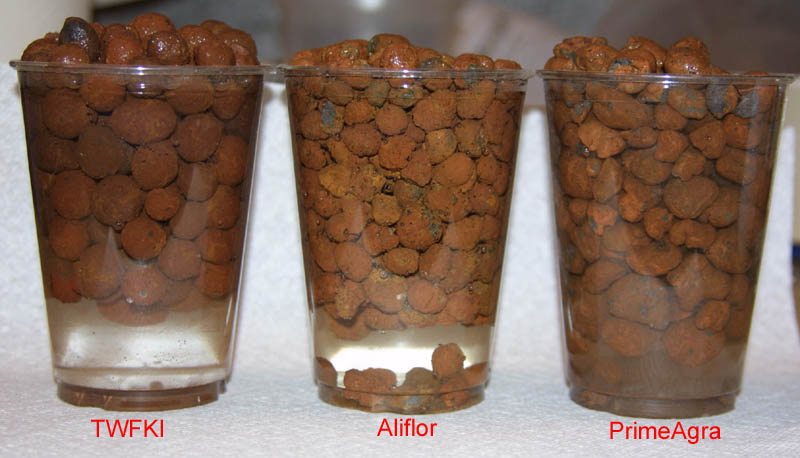 As you can see from the photo above, the Taiwanese material floated considerably more than the others, about 1.25″ above the bottom of the container. By comparison, the Aliflor floated 0.75″, with a few pebbles sinking to the bottom, while the PrimeAgra only rose approximately 0.5″ above the bottom, again with a few sinking. Later testing of the Stalite shale product showed essentially no flotation.

This simple test suggests that the Taiwanese material will not be suitable due to its tendency to float out of a pot upon watering. Floatation is not merely a matter of buoyancy, but is also related to the interlocking of the particles of the medium, and again, the extremely spherical nature of the Taiwanese material renders it a poor choice. Both the Aliflor and PrimeAgra brands have irregular shapes, and “locked” reasonably well in the pot. The same is true of the expanded shale Stalite, which – being a crushed natural product, rather than a formed material – has more of an angular shape, as shown earlier.

Another key to success is the availability of air to the root zone. In nature, orchid roots, being attached to trees or rocks, and only barely covered with forest detritus, are essentially totally exposed to the air. While orchid roots are quite adaptable, in any medium it is still critical to provide air to the root zone to permit gas exchange to occur in as unrestricted manner as possible.

In order to measure the free airspace of the media, the following, rather unsophisticated procedure was followed:

The data is displayed below. All weights are in grams:

There is more to the story than has been covered so far, but we may draw a few conclusions from the data:

While the ability of a medium to store water and nutrients is important, even more critical is its ability to deliver it to the plant and to the surrounding media. That is why we must assess the capillarity of the media.

This test utilized the same 300 ml plastic containers as before, and due to the poor performance of the TWFKI material, it was dropped from consideration and not tested. The other materials were subjected to the following procedure: 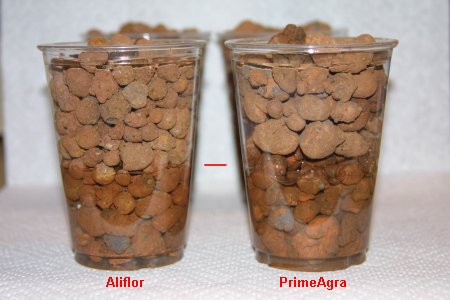 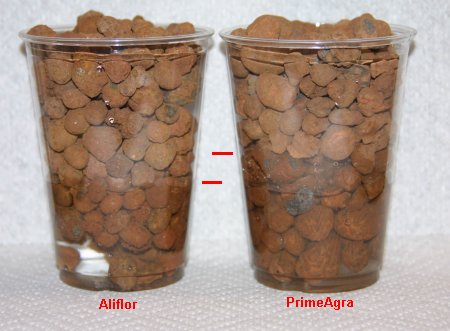 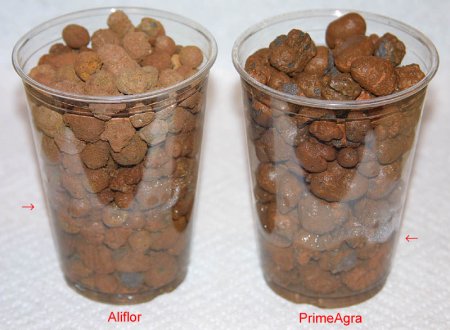 After standing undisturbed for 24 hours, the liquid level in the Aliflor is essentially unchanged, and capillary action has carried moisture to material about 3/4″. The liquid in the PrimeAgra sample, on the other hand, has dropped about 40% from its original level, and has transported the liquid into the remaining medium, which is totally wet, clear to the top.

A warming of ambient conditions compared to the initial testing caused some fogging in the container of Stalite (and poor photographs), but 24 hours after the test was begun, the water level was essentially unchanged, as only about 1/2 inch of the material above had be moistened through capillary action. 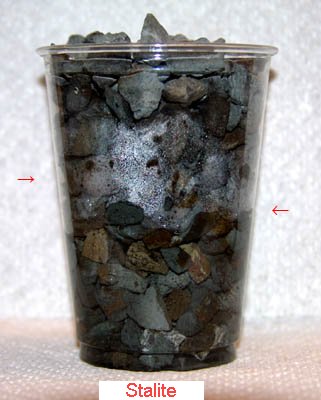 The results of the capillarity test were quite astounding, to say the least.

The combination of superior capillary action and the greatest open space between the particles certainly meets the two criteria of delivering a consistent moisture and nutrient supply to the root system while maintaining sufficient air space to allow proper gas exchange, and makes the PrimeAgra a clear stand-out selection.

The question as to whether the mass of the particles is sufficient to allow the plant to become well established in the pot has not been addressed in this study, but I can assure you that practical use of the material with orchids for over a year by this author has proven it to be so, and years of experience by commercial- and hobby growers of plants for the home and office environments lends further credence to the assessment. A greater density – possibly approaching that of the Stalite – might be an advantage, but the extreme packing density and low capillarity far outweigh that aspect.